The Raptor is a thermal duration free flight glider designed for our S.O.A.R. catapult glider contests. It can also be hand launched if desired. The main design parameter is based on the 18 inch maximum wingspan rule. I decided to use all balsa construction for its great strength to weight ratio and ease of building. The first ones had 1/4 inch hard balsa fuselages and very light (5 to 6 lb) balsa for the wing and tail surfaces. I have since modified the design slightly by adding more wing area (wider chord), and using a hollow carbon rod for the fuselage tail boom. This stronger fuselage comes in handy when you have a bad test flight or launch ending in a high velocity lawn dart type crash! These changes made the new version slightly heavier weighing almost 2 ounces. It seemed to launch higher but the all balsa version floated better. The original version used a burning rope type fuse and a pop up stab for the DT (dethermalizer). This worked reliably in flight but it was a pain to constantly cut and change burnt fuse and rubber band, and light the fuse before each flight during a contest. This year I switched to a modified Tomy toy wind-up type timer for DT with excellent results. It normally runs for 30 seconds but can be modified by adding wire arms and very tiny weights to the wiggler mechanism. This allows it to run for up to 3 minutes and is quite consistent and easy to use. This is great for test flights and launch trimming because you can set the DT for a very short time and it cuts down on your chase time. I am very happy with the way The Raptor flies and it has proven itself by winning all 4 contests it has been flown in.

I have provided two photos of the model and a three-view/building plan for consideration in the S.O.A.R. Achievement Award Program under Section VI – Annual Design Award (for whole Sailplanes only). 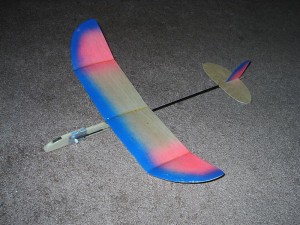 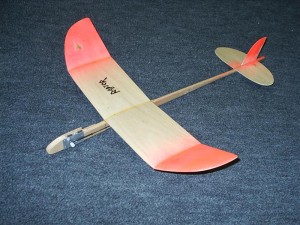